Summary of a research result announced on February 15, 2013

Thermoelectric power generation is a technology that can convert thermal energy (in the form of a temperature difference) into electrical energy using solid devices. With the recent growing interest in energy problems, thermoelectric power generation has been attracting attention as a possible means of effectively utilizing the huge amount of unused waste heat. In particular, it is desired to recover and use intermediate-temperature (300-500oC) waste heat from automobiles and plants. Promising thermoelectric materials for the temperature range consists of toxic elements such as lead (Pb) and this fact is an obstacle to practical use.

In 2011, the research group of JAIST started searching for thermoelectric materials containing Cu and S, which are non-toxic and earth-abundant elements. About a year ago, the group artificially synthesized a material with a composition almost identical to that of tetrahedrite, a naturally occurring sulfide mineral, and reported its relatively high thermoelectric performance at room temperature in an international journal published by the Japan Society of Applied Physics. The scientists of JAIST, in cooperation with those from AIST with remarkable achievements in the research on thermoelectric sulfides, continued the research and found that nickel(Ni)-substituted Cu12Sb4S13, Cu12-xNixSb4S13, exhibits a high dimensionless thermoelectric figure of merit*3 of ZT=0.7 (equivalent to conversion efficiency of 7%) at approximately 400oC. This value is the highest among p-type*4 Pb-free sulfides so far. Tetrahedrite is now attracting worldwide attention as a promising thermoelectric material. At the end of 2012, a research group from Michigan State University (USA) also reported high thermoelectric performance in tetrahedrite Cu12-xMxSb4S13 (M=Zn:zinc or Fe:iron).

The high performance of tetrahedrite is caused by its extremely low lattice thermal conductivity*5, which is approximately half that of silica glass. A powder X-ray diffraction experiment was carried out using synchrotron radiation at SPring-8, which has been used to analyze the structural properties of various thermoelectric materials, to investigate the crystal structure of the Ni-substituted tetrahedrite and the vibrational properties of its atoms in detail. The results indicate that the Cu atom on the CuS3 triangular plane vibrates with low frequency and large amplitude in the direction perpendicular to the triangle plane. From this finding, the vibration of Cu atoms with anomalously large amplitude is considered to inhibit heat transfer through the hard Cu-Ni-Sb-S network, resulting in the low thermal conductivity.

The research results were published online in Journal of Applied Physics on January 28, 2013.

Tetrahedrite is a naturally occurring mineral that generally has a composition of (Cu, Fe, Ag, Zn)12Sb4S13. It has a cubic crystal structure with 58 atoms in a unit cell. The crystal structure is complex because the atoms form CuS4 tetrahedra, CuS3 triangles, and SbS3 trigonal pyramids.

The dimensionless thermoelectric figure of merit ZT of a material is defined as ZT=S2Tρ-1(κel+κL)-1, where T (K) is the absolute temperature, ρ (Ω m) the electrical resistivity, S (V K-1) the Seebeck coefficient, κel (W K-1 m-1) the electronic thermal conductivity, and κL (W K-1 m-1) the lattice thermal conductivity. High-performance thermoelectric energy conversion requires that materials have a low ρ, a high S, and a low κel and κL . A low ρ and high S of a thermoelectric material correspond to a low internal resistance and high output voltage of battery, respectively. A low κ is required to maintain the temperature difference, which generates a voltage.

p-type and n-type are terms generally used to indicate the type of carriers for charge transfer in semiconductors. In p- and n-type semiconductors, holes and electrons are charge carriers, respectively. In this report, materials with a positive Seebeck coefficient are called p-type materials. 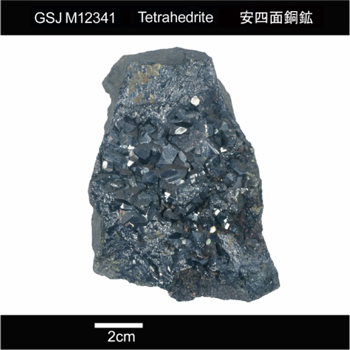 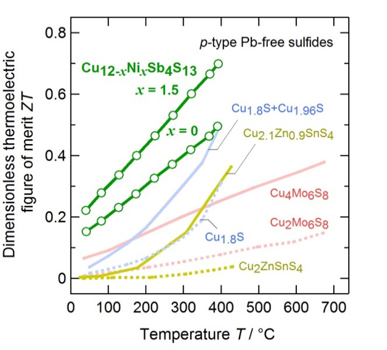 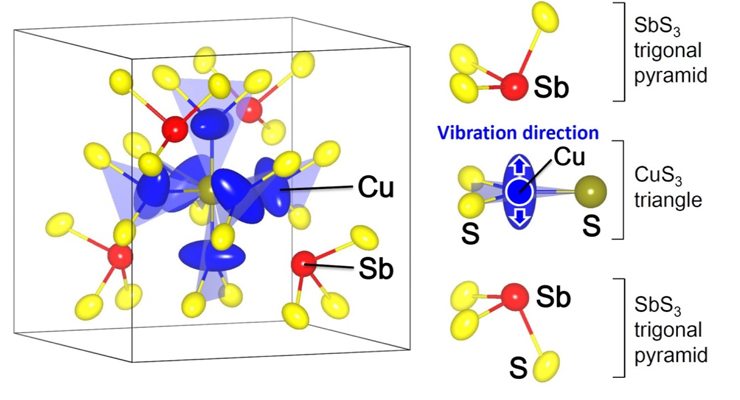 Fig. 2 Part of crystal structure of tetrahedrite. Cu atoms vibrate with large amplitude in a direction perpendicular to the CuS3 triangle plane and toward the Sb atom.