March FY 2018 Degree Conferment Ceremony was held at Cultural Hall of Tsurugi Cultural Complex (Crain) on March 22 (Fri), 2019. A total of 286 students: 263 students in the Master's program and 23 students in Doctoral program received their diplomas.

Each student received the diploma from President Asano, and shook hands with the dean and supervisor.
After address of thanks by the student representative was given, Institute song was sung by participants. 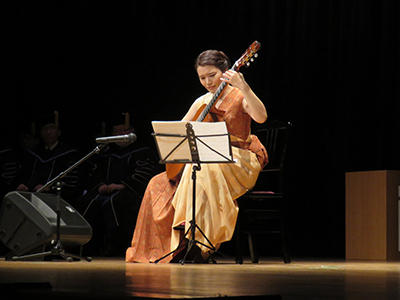 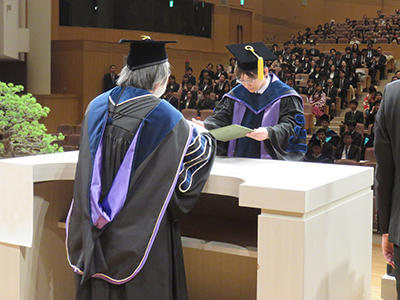 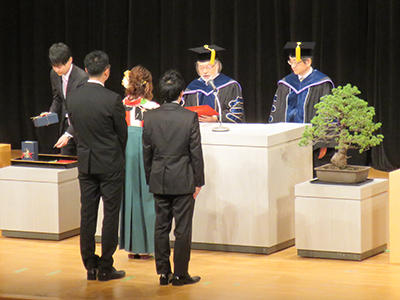 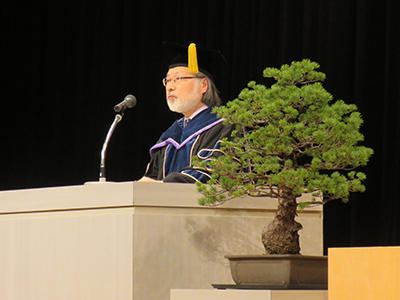 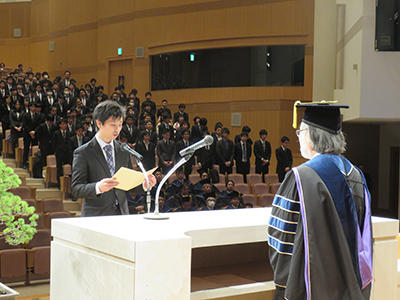 Address of thanks by the
student representative

Commencement Speech of the President

Congratulations on your graduation! I also would like to congratulate your parents, friends and professors. Representing Japan Advanced Institute of Science and Technology, I would like to express my sincere gratitude to all of you.

As you all know, the world today is facing an unprecedented scale of changes. Even if you get a job at a large corporation, there is no guarantee that the corporation can continue to exist until your retirement. In addition, you never know how long the skills you have acquired remain to be effective. Then, what should we do to live in this world of uncertainty? I believe "Intellectual Toughness" is the most important ability to live through this turbulent age. The "Intellectual Toughness" means to keep challenging in seeking for broader experiences and knowledge. If you have a tireless spirit of challenge without fearing the unknown, you have nothing to be afraid of.

By the way, my research area is information science especially algorithm. Algorithm research is one of the research areas aiming at devising a procedure by which we can solve a given problem. First of all, we examine whether there is a procedure to solve a problem. And if more than two or more procedures exist, then we compare them to find which one works better. The ultimate goal is to find the best procedure on a certain criterion and also to prove that there are no other procedures that can work better than the one we have found. The last part is hard because a definition of "the best" may be changed when the criterion changes.
In studying algorithms, finding an optimal algorithm that is the best procedure on a certain criterion is not the end of the research. Next comes a question what would happen on a different criterion. In this way, algorithm research never ends. Even if we thought we have found an optimal algorithm, it may no longer be the optimal one on a different criterion.

Let me talk about computational geometry, which has been my research interest. Given a number of points in the plane, we would like to find a point that minimizes the sum of the squared distances to those points. We could easily get an idea as follows. Starting from an arbitrary point, we take a point in its neighborhood and compare which has the smaller sum of the squared distances. If the point in the neighborhood achieves the smaller sum, then we take the point as the current point. If it is not the case, we just discard the point. Repeating the process of updating the point with a better evaluation, the sum of squared distances gets smaller and smaller. In fact, if we could nicely take a point in the neighborhood, the point converges to a point. Then, we just report the point.
A fatal drawback of the algorithm is that convergence is achieved only by a nice way of choosing an appropriate neighborhood. But isn't there any completely different algorithm? To tell the truth, it is easy. Since we are given coordinates of the points, we can take their averages in x and y. The point determined by the averages is the optimal point that minimizes the sum of squared distances. No iteration is needed.

Now, what happens if we change the criterion a little bit. We have thought through a problem of finding a point that minimizes the sum of squared distances to the given points. What happens if we replace the sum of squared distances with the sum of distances? Then, the point determined by the averages of given points is not optimal. In fact, it has been mathematically proved that an optimal point is not characterized by only using coordinates of given points. Therefore, we come back to our iterative improvement method. On the other hand, it is proved that the iterative improvement method always approaches to the optimal point.

Although it gets long, what I wanted to say is that in studying algorithm we are never satisfied with just the current solution but we persistently try to find a better algorithm by seeking for any improvement. Such an attitude is important in our lives. I believe we can keep developing ourselves further if we constantly make efforts to find better solutions instead of being satisfied with the solution you have found.

I think you will face a lot of difficulties in your coming lives. If you have a strong mind of making challenges to any changes without fear of new things, then you don't need to be in fear of anything. I want you to recognize yourself as a qualified new global leader. I strongly hope for every one of you to take a great leadership in society or industry, and guide the world to the highest level of its development.