■論文概要
Deriving inspiration and biomimicking the structural hierarchy of biopolymers, has led researchers to explore a number of fields especially evaporation based self-assembly of particles. One of these is the use of air-liquid crystalline (LC) interface for organization of polymer LC domains into highly ordered films. We have studied the evaporation induced self-assembly behavior of a polysaccharide solution through planar as well as linear evaporative fronts. The planar front leads to deposition of layered, in-plane oriented film. Whereas, a linear front leads to nucleation followed by a vertically deposited membrane formed by the splitting of the interface. The meniscus curve was analyzed theoretically so as to clarify the rationale behind splitting of the interface in a linear front followed by vertical deposition. This splitted interface actually is capable of providing approximately twice the surface area as compared to the normal one. We foresee that optimizing drying conditions and concentration, other polymeric solutions can also split meniscus and form highly oriented vertical deposition.

■受賞にあたって一言
Being appreciated for what you do can only be described as the best encouragement for a student. I'm very grateful to the organizers and judges for presenting me with the Best Poster Award. It was an excellently organized event where we could interact with researchers broadening the gel research in fields like sensors, microfluidics, 3D printing.
The immense gratitude I have for Prof. Tatsuo Kaneko and Sr. Lect. Kosuke Okeyoshi is indescribable. PhD journey is extremely challenging but also equally satisfying for me because of their guidance. It is essential to thank all Kaneko lab members for being so caring and fun to be with. 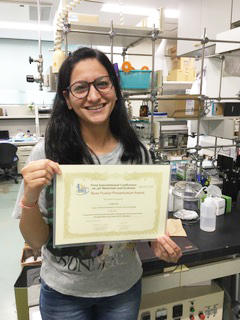