"Matching HUB Kanazawa", an industry-academia-government-finance collaboration event in Hokuriku, is held mainly by Industrial Collaboration Promotion Center, JAIST. This event is aimed at revitalizing and fostering human resources in Hokuriku and discovering and supporting people who start new businesses. "Matching HUB Business Idea & Plan Competition (M-BIP)" is a business idea and plan contest for students. The contest is aimed at using students' idea and research achievement for business. "M-BIP" is a part of "Matching HUB Kanazawa" event.
"The Best Award" is the recognition of the best proposal which is reviewed by the public presentation through document screening. "Telecom Service Association Award" is a reward of a proposal befitting a recommendation to Hokuriku Innovation Trial 2017 which is held by the association. "The Audience Award" is selected by the votes of visitors.
My proposal was selected as those awards among 16 proposals through document screening.

■Comment
It is the first time for me to participate in a contest after enrollment in JAIST. Being a foreign student, I am very happy to have received three awards including the Best Award for this proposal, and I have strongly felt the globalization of Japanese society. The awards are very encouraging for me, because I would like to conduct research on nursing care field as a master's thesis and be an entrepreneur after graduate from JAIST.
Finally, I am deeply grateful to Prof. Miyata who supervises me and boosts students' independent activities, and Miyata Lab.'s Assistant Prof. Ura who gave me many instructive comments for my idea. 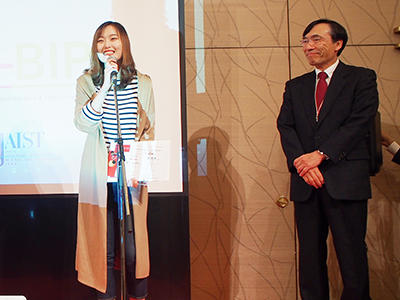 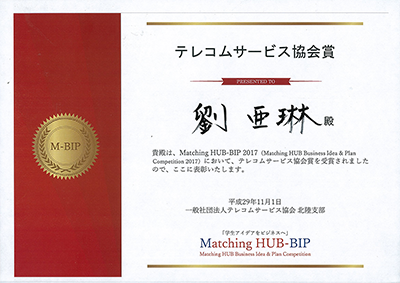 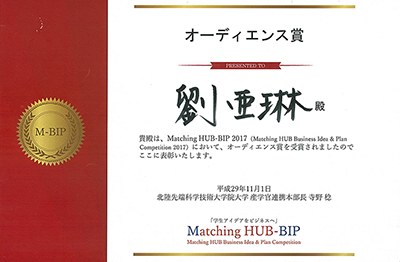