Atomic Level Characterization (ALC) is an international symposium sponsored under the auspices of the 141st Committee on Microbeam Analysis of the Japan Society for the Promotion of Science (JSPS). The ALC symposia focus on practical applications of atomic dimensions and energy levels characterization of new materials and devices, including bio- and organic materials as well as inorganics. The ALC'17 was held at Aqua Kauai Beach Resort in Hawaii from Dec. 3 to 8, 2017. The Student Awards was awarded to seven from among more than 220 total presentations.
Reference：https://alc.surf.nuqe.nagoya-u.ac.jp/cgi-bin/alc/create_menu_contents.cgi?symposium=alc17&menu=award

■Abstract
Layered materials can be grown on various substrates through van der Waals epitaxy (VDWE) regardless of lattice mismatch.
The atomic level study of the film-substrate in VDWE is becoming increasingly important due to their expected applications as 2D materials.
In this contribution, we have grown GaSe thin films on Ge(111) substrates by MBE and studied the GaSe/Ge(111) interface using STEM and STM.
Cross-sectional STEM observations revealed that the grown layers adopt predominantly the expected wurtzite-like structure and stacking, but monolayers with an unexpected, zinc-blende-like structure and other layer stacking sequences exist locally near the film-substrate interface.
By STM, Moiré patterns indicating in-plane rotation of a few degree between GaSe(0001) and Ge(111) lattices were locally observed.
These results demonstrate that even in VDWE, structural changes can occur in the grown layers adjacent to the substrate, highlighting the importance of such interface for synthesizing and applying ultimately thin 2D materials.

■Comment
I am very honored to be selected as a recipient of the ALC'17 Student Award.
I would like to express my greatest gratitude to Prof.Yukiko-Yamada Takamrura, Prof.Yoshifumi Oshima and Dr.Antoine Fleurence, who advised and encouraged me during my research.
I am also very grateful to Dr.Tatsuya Murakami and Mr.Koichi Higashimine for the technical supports. 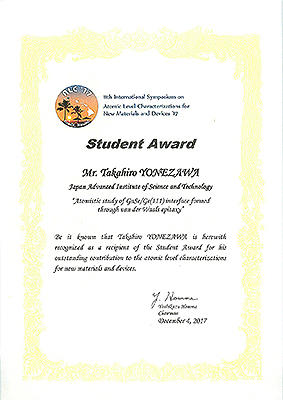 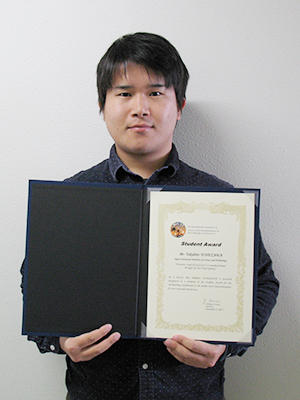 ■Abstract
Spider silk has properties of high toughness and high strength and is being studied as attractive materials. Many marvellous molecular structures and mechanisms of spider silk have been discovered so far. Some researchers and manufacturers are trying to create artificial spider silk using biotechnology. The gene and amino acid sequences are known, and so it is easy to make raw protein of silk. However, it is a tremendous challenge to create it into a genuine silk. On the other hand, the reason for the high strength of spider silk is not well understood yet. In this study, spider silk was observed by using a homemade femtosecond laser second harmonic generation microscope. As a result, different nonlinear optical responses were observed in the radial line and spiral line of the spider web which look similar to the naked eyes. This SHG signal is suggested to be strongly correlated with the β-sheet structure of protein in the spider silk. A model of the microscopic structure of the spider silk was proposed. As shown in this study, the second harmonic generation image of spider silk reflects also what is happening in the spider's gland. Thus in the future, the secretory glands of the spider can be observed by this microscope to find the mechanism of the production of the silk. 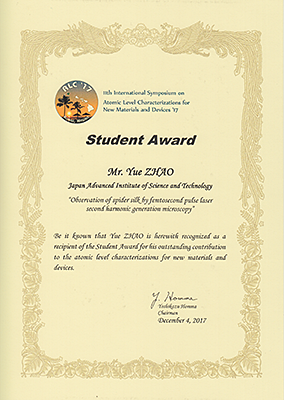 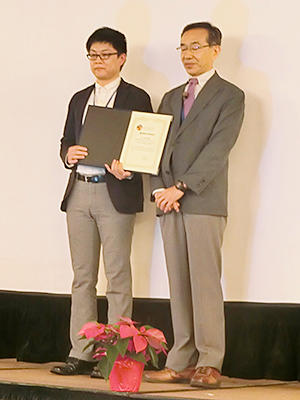 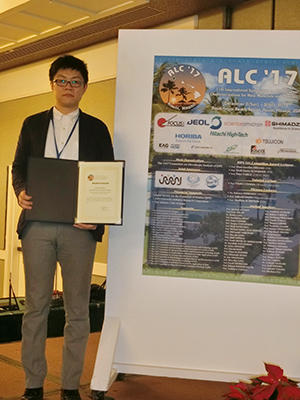