■Abstract
Recent decades have recognized the popularization of multiprocessor architectures in real-time embedded systems. Real-time task scheduling in such systems has become a challenging problem as a result. In this paper, we are presenting an optimal scheduling algorithm, which can successfully schedule any task sets with no deadline miss if the total utilization of tasks does not exceed the capacity of the involved system. The proposed algorithm called LLA introduces a so-called fixed task-scheduling plan for every time interval that is defined as the time period between two consecutive job releases. At the beginning of each interval, LAA makes the scheduling plan by predicting tasks' requested amount of execution time within the interval and then arranging these amounts to processors appropriately respecting to requirements of scheduling. By this approach, LAA can extremely reduce the number of scheduler invocations to the number of job releases. Furthermore, simulation results show that our algorithm has lower time complexity while retaining the schedulability, task preemption, and task migration competitive to the existing scheduling algorithms.

■Comment
It was my honor to present my research's outcome at the IEEE 12th International Symposium on Embedded Multicore/Many-core Systems-on-Chip (MCSoC-2018) in Hanoi, Vietnam. The academic paper introduces a new optimal scheduling algorithm for the problem of real-time task scheduling on multiprocessor systems. The scheduling problem is solved by making so-called fixed task-scheduling plans on time intervals decided by consecutive job releases. Outstandingly, the paper was selected for the Best Paper Award of the MCSoC-2018. For this achievement, I would like to thank Associate Professor Tanaka for his devoted help during my research. Then, I would also like to express my thanks to JAIST for the Research Grant which significantly supports me in finance to present at the conference. During the time at the conference, I had wonderful chances of meeting and discussing with other researchers and experts about different topics of the field. This is really helpful for my on-going research as well as my future plans. 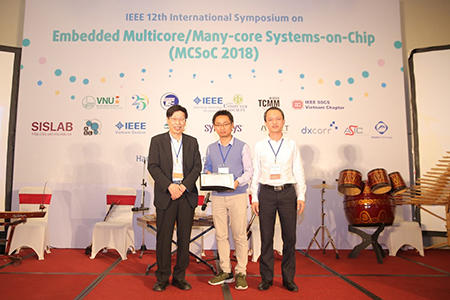