Scanning transmission electron microscopy (STEM) allows us to visualize the position of individual atoms inside materials and calculate atomic displacements. However, its precision is limited by measurement noise. In a recent study, scientists from Japan combined a technique from data science with STEM to achieve a remarkable improvement in precision, pioneering a strategy to develop innovative nanomaterials and devices at the atomic scale.

Sometimes, a material's property, such as magnetism and catalysis, can change drastically owing to nothing more than minute changes in the separation between its atoms, commonly referred to as "local strains" in the parlance of materials science. A precise measurement of such local strains is, therefore, important to materials scientists.

One powerful technique employed for this purpose is "high-angle annular dark-field imaging" (HAADF), an approach within scanning transmission electron microscopy (a technique for mapping the position of atoms within materials), that produces images with bright spots that theoretically coincide with atomic positions. However, in practice, HAADF images are often distorted due to mechanical and electrical noise in the apparatus, limiting the smallest measurable local strains to slightly over 1%.

The team combined HAADF imaging with Gaussian process regression (GPR), a data processing technique commonly used in machine learning and fields such as economics and geology. In a Gaussian process, the true state of data (in this case, atomic positions or displacement) is assumed to be represented by a smooth function, and random noise is added to this 'true state' when data is observed. By reversing this process through GPR, one can more accurately estimate the true positions of the atoms, and thus calculate local strains with higher precision. Specifically, the proposed method enabled the team to measure strain with a precision of 0.2%.

The team demonstrated the potential of their approach by measuring local strains in gold nanostructures and comparing tensile strains in a gold nanosphere with those in gold nanorods (essentially cylinders with hemispherical caps) of different lengths. These comparisons revealed that strain distributions in gold nanoparticles varied depending on their shape, with nanorods exhibiting a tensile strain of about 0.5% near the region where curvature abruptly changes. Dr. Aso explains the motivation behind these specific experiments: "It is known that spherical gold nanoparticles are subjected to uniform stress over their entire surface, and this stress is proportional to surface tension. Thus, uniform compressive strain occurs in the direction perpendicular to the surface. In contrast, in gold nanorods, the stress applied to the surface becomes non-uniform, and scientists have theorized that tensile strain should occur in certain places. However, this had not been proven experimentally, until now."

With these findings, the team is thrilled about the future prospects of their strain measurement strategy. "Our technique will provide detailed information on the atomic world, which is necessary for the development of innovative materials and devices with both high performance and small size. This could be useful for the development of devices and sensors employing nanoscale materials and structures. Moreover, the method requires no expensive modifications or complicated procedures and can be readily adopted, " says Dr. Aso.

One thing's for sure: we can now understand and manipulate the atomic world even better! 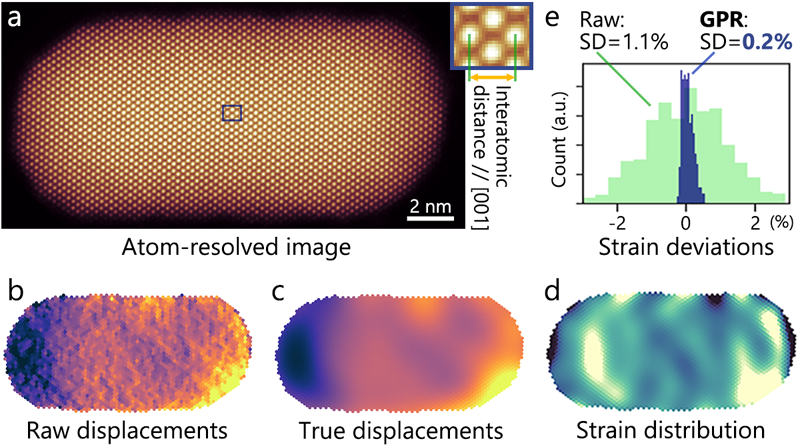 (a) A HAADF image of a rod-shaped gold nanoparticle. The bright spots correspond to individual atoms. (b) Raw atomic displacements calculated via a conventional method. Larger displacements in either direction are shown in darker blue and lighter yellow. The noise in the measurement can be appreciated in the granularity of the image. (c) The true displacements predicted by GPR. The noise component was successfully removed. (d) Local strain map in the nanorod. Both cap ends exhibit bright yellow areas, indicating tensile strain along the long axis. (e) Comparison with the conventional method. By using GPR, the minimum detectable local strain was improved from 1.1% to 0.2%.

Funding information
This study was partly financially supported by a Grant-in-Aid for Scientific Research B (No. 25289221 and No. 18H01830) from Japan Society for the Promotion of Science, the ACCEL program (JPMJAC1501), Japan Science and Technology Agency (JST), and the Education and Research Support Program on Mathematics and Data Science 2017 from Kyushu University.