Since the discovery of low-temperature superconductors, there has been an ongoing effort to realize superconductivity at room temperatures with low cooling costs. Crystalline materials containing hydrogen have shown promise on this front. Now, a global team of researchers have performed simulations to predict new crystal structures with hydrogen atoms as potential high-temperature superconductors, opening doors to energy-efficient technologies with lossless power transmission.

Materials scientists have had a breakthrough on this front with crystalline materials containing hydrogen, known as "metal hydrides." These are compounds formed by a metal atom bonded with hydrogen that have been predicted and realized as suitable candidates for achieving even room-temperature superconductivity. However, they require extremely high pressures to do so, limiting their practical applications.

In a new study published in Chemistry of Materials, a group of researchers led by Professor Ryo Maezono from Japan Advanced Institute of Science and Technology (JAIST) performed computer simulations to expand the search for high-temperature superconductors, looking for potential candidates among ternary hydrides (hydrogen combined with two other elements).

"In ternary hydrides, the number of elements is increased from two to three. While this enormously increases the number of possible combinations and can make the problem of predicting suitable materials more difficult, it also increases our chances of coming across a potential high-temperature superconductor," explains Prof. Maezono.

Using the supercomputer at the university, the researchers examined possible crystal structures for (LaH6) (YH6)y compounds (y= 1-4), looking for configurations that would yield stable structures, allowing their synthesis in the laboratory at high pressures. Starting from a random structure, the simulations went through various possible combinations of elements, testing their stability at extremely high pressures ~ 300 GPa.

The simulations revealed clathrate (Cmmm-) structures of LaYH12 and LaY3H24, consisting of LaH24 and YH24 cages stacked on top of each other (Figure 1), as viable candidates for high-temperature and high-pressure superconductors. "The longer stacking for Cmmm-LaY3H24 lead to a slightly increased transition temperature," explains Prof. Maezono. Among the possible structures, the highest transition temperature (145.31 K - 137.11 K) was observed for LaY3H24. The researchers attributed the origin of higher transition temperature to a high "density of states" and high "phonon frequency," two parameters that are used to assess superconductivity in materials.

These findings have excited the researchers, who optimistically speculate the discovery of more such high-temperature superconductors. "It is quite possible to predict using simulations other new combinations of elements that would improve the desired properties further," says Prof. Maezono.

With potential new discoveries on the horizon, a practical superconductor-based technology may not be a pipe dream after all! 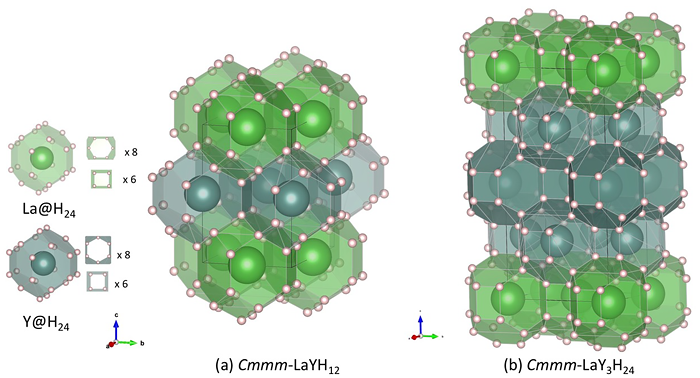