Charging a Green Future: Latest Advancement in Lithium-Ion Batteries Could Make Them Ubiquitous

Scientists add a specific polymer composite to the silicon anode of lithium-ion batteries, which significantly increasing their lifetime

Lithium-ion batteries (LIBs) power electric vehicles and electronics. With the prevalence of these set to increase, efforts have been directed towards improving the performance and longevity of LIBs. Now researchers from Japan Advanced Institute of Science and Technology have shown that adding a specific polymer composite binder to the silicon anode of LIBs can improve its structural stability significantly, making it viable for much more powerful, long-lasting LIBs, and changing the future of the technologies it drives.

Think of a battery, and the term lithium-ion most likely comes to mind. Because of its light weight, high-energy density, and ability to deliver three times as much current as other types of rechargeable batteries, lithium-ion batteries (LIBs) have become the dominant type of battery in both low-power consumer electronic devices, such as mobile phones, and high-power applications, such as electric vehicles and energy storage.

Any typical lithium-ion battery today consists of a positive electrode (cathode) made up of a lithium-containing compound, a negative electrode (anode) made up of graphite, and electrolyte--the layer in between the electrodes through which ions flow. When a battery is charged, lithium ions flow from the cathode to the anode, where they are stored. During the discharge process, the lithium is ionized and moves back to the cathode.

Recently, there has been a growing interest in using silicon as the anode material because it is more abundant, and therefore cheap, and has a higher theoretical discharge capacity than graphite. However, it has a key disadvantage: repeated charging and discharging causes the silicon particles to expand and rupture. This results in the formation of a thick solid-electrolyte interface (SEI) between the electrolyte and the anode, which hinders the movement of lithium ions between the electrodes.

To improve the performance of silicon anodes in LIBs, a team led by Professor Noriyoshi Matsumi, and also including Dr. Agman Gupta and Senior Lecturer Rajashekar Badam, from Japan Advanced Institute of Science and Technology (JAIST), has developed a binder for the silicon particles, which can improve their stability and maintain a thin SEI layer. Now, in contrast to a thick SEI layer, a thin one is beneficial because it prevents the anode and electrolyte from spontaneously reacting with each other. The results of the study are published in ACS Applied Energy Materials.

The binder is a polymer composite consisting of an n-type conducting polymer poly(bisiminoacenaphthenequinone) (P-BIAN) and a carboxylate-containing polymer poly(acrylic acid) (PAA), each linked to the other via hydrogen bonds. The composite polymer structure holds the silicon particles together like a net and prevents them from rupturing. The hydrogen bonds between the two polymers permit the structure to self-repair, as the polymers can reattach themselves if they break away at any point. Moreover, the n-doping ability of P-BIAN improves the conductivity of the anode and maintains a thin SEI by limiting the electrolytic decomposition of the electrolyte on the anode.

To test the binder, the researchers constructed an anodic half-cell consisting of silicon nanoparticles with graphite (Si/C), the binder (P-BIAN/PAA) and an acetylene black (AB) conductive additive. The Si/C/(P-BIAN/PAA)/AB anode was put through a repeated charge-discharge cycle. The P-BIAN/PAA binder was observed to stabilize the silicon anode and maintain a specific discharge capacity of 2100 mAh g-1 for over 600 cycles. In contrast, the capacity of the bare silicon-carbon anode dropped to 600 mAh g-1 within 90 cycles.

After the test, the researchers disassembled the anode and examined the material for any cracks that might have resulted from silicon rupture. A spectroscopic and microscopic examination after 400 cycles revealed a smooth structure with only a few microcracks indicating that the addition of the binder was able to improve the structural integrity of the electrode and maintain a uniform SEI.

The results demonstrate that the addition of the binder can improve the characteristics of the silicon anode and make it practically feasible. "The design and application of novel polymer composites comprising n-type conducting polymers (CPs) and proton donating polymers with hydrogen bonded networks, like P-BIAN/PAA, hold a promising future in high-capacity electrode materials", says Prof. Matsumi.

As the demand for lithium-ion batteries increases, silicon, which is the eighth-most abundant material on earth, will be a promising environment-friendly alternative to graphite. The improvements to its structural stability and its conductivity with the use of binders will make it more suitable for use in future lithium-ion batteries. "This composite binder design principle will enable wider diffusion of EVs, creation of other battery driven vehicles, and drones, which requires a higher energy density for advanced performance," says Prof. Matsumi. 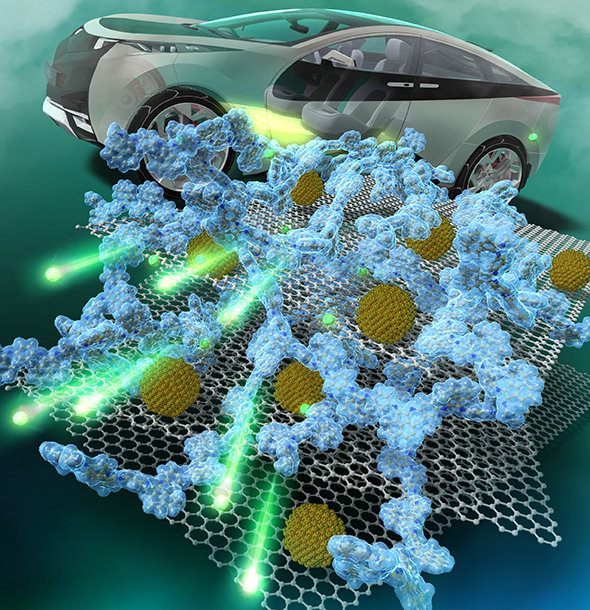 Figure 1. Silicon particles in a lithium-ion battery protected by a polymer binder mesh
Polymer binders can make lithium-ion batteries suitable for practical application in electric vehicles and other advanced electronics such as drones, thanks to the stabilizing effects they have on silicon anodes
Image credit: Noriyoshi Matsumi from JAIST.

Figure 2. Structure, function, and performance of silicon anodes in lithium-ion batteries with and without the polymer binder
(Clockwise from left)
(a) The structure of the composite binder consisting of P-BIAN and PAA linked by hydrogen bonds
(b) The binder provides mechanical support and holds the silicon particles together
(c) Comparison of charge-discharge charactertics between P-BIAN/PAA binder and various control systems at 500
Image credit: Noriyoshi Matsumi from JAIST.