X-ray diffraction (XRD) is an essential technique to identify the structures and compositions of newly developed materials. However, XRD patterns consist of multiple peaks, and it is not always possible to judge which ones are relevant to describe the features of the material. Researchers from Japan have recently proposed a neural network that uses the auto-encoder technique to permit the in-depth analysis of XRD patterns to reveal features that might not be identified by humans.

X-ray diffraction (XRD) is an experimental technique to discern the atomic structure of a material by irradiating it with x-rays at different angles. Essentially, the intensity of the reflected x-rays becomes high at specific irradiation angles, producing a pattern of diffraction peaks. An XRD serves as a fingerprint for a material since each substance produces a unique pattern. In research and development, changes in XRDs are used to identify the positions and amounts of additional elements that need to be added to fine-tune a material to help enhance a desired functional property, say, energy storage efficiency in batteries.

However, the peak changes in XRDs are barely discernible to humans. This makes ascertaining the features and relevance of different peaks for material characterization difficult. To this end, a group of Japanese researchers, led by Professor Ryo Maezono from the Japan Advanced Institute of Science and Technology (JAIST), applied a Deep Learning technique called 'auto-encoder' to the problem to find hidden regularities in XRDs that could help accelerate the development of new functional materials. The research team also included Associate Professor Kenta Hongo and Assistant Professor Kousuke Nakano from JAIST. Their work has been published in Advanced Theory and Simulations.

Using a neural network, the researchers applied the auto-encoder to 150 XRD patterns of magnetic alloys with different concentrations. In the feature space, each XRD is projected to a single point. These points form clusters, in which similar materials with similar constituent concentrations are placed closer together. Thus, the distance between the points in the feature space allows the estimation of the concentration of any given sample alloy. This also permits the fine-tuning of alloys by indirectly identifying the XRD peaks that change when new elements are added to an alloy or its constituent element ratios are altered.

The researchers further proposed a novel application of the feature space. When a peak of interest is masked on the original XRD pattern, the point on the feature space shifts. The extent of the shift helps distinguish how relevant a peak is to capturing the properties of a material. Using this technique, the researchers were able to identify which peak is actually relevant to be watched out for estimating the amount of doping etc., --something that could not have been predicted by a human but was revealed using Deep Learning.

The researchers also proposed the application of the auto-encoder for the generation of artificial XRD patterns by interpolating existing ones to handle tiny changes in alloy compositions. The approach would generate plausible datasets, avoiding computationally expensive ab initio simulations.

"The results of this research are not limited to XRD peak patterns. Rather, they provide a general Deep Learning technique that can be used to extract features from material science data. Its framework can find hidden regularity in nature that is not identifiable by humans and is expected to serve as a powerful tool for theorem discovery through data science," says Prof. Maezono.

The application of the described auto-encoder could accelerate the development of high efficiency, low cost, and low environmental impact materials, ushering in a new era of Deep Learning-based materials science research. 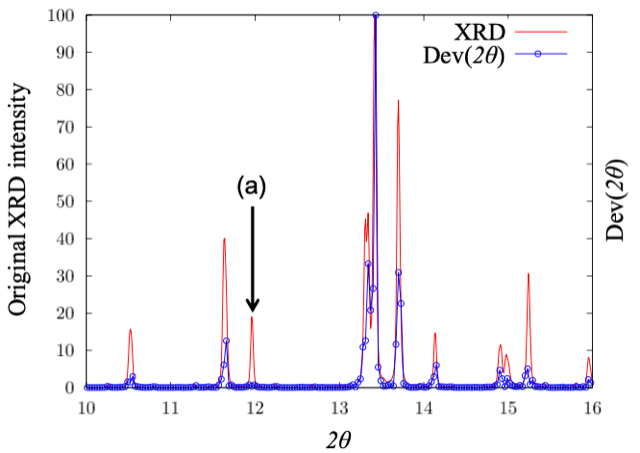 Title: Recognition of X-ray diffraction peak pattern
Caption:The significant increase in intensity of reflected light for a particular angle of incidence is represented as a peak, and its pattern can be used as a "fingerprint/feature of a compound." One peak pattern consisting of many peaks corresponds to one compound.
The test data diffraction pattern (red curve) is overlaid with the auto-encoder output (blue curve) representing the relevance of peaks in characterization. The peak labeled (a) has significant intensity but low relevancy, a Deep Learning result.
Credit: Ryo Maezono from JAIST
License Type: Original Content
Usage Restrictions: Cannot be reproduced without permission