■論文概要
Robot emotion representation is gaining increasing attention to facilitate long-term human-robot interaction (HRI) in recent years. In particular, human-like robot emotion elicited through HRI is of great use in creating trust between humans and robots. In attempting to represent robot emotions that lead to gaining social acceptance, psychological studies of human emotion have been extensively performed. Among the various factors that affect the way people express their emotional competencies, we conjecture that two factors, social interaction and experience, can be considered important to elicit human emotions, and therefore can be used to represent robot emotions. We believe that social and developmental interaction paradigms, such as social sharing and social referencing, can shape robot emotions toward promoting social acceptance. Besides, the robot's previous experience can be a key factor contributing to robot personality formation and development. In this paper, we not only focus on the modeling of two eliciting factors affecting the formation of robot emotion but also examine the decline of memory retention over time. Specifically, the relationship between emotion and memory is investigated to design a filter for the memory consolidation process and memory forgetting mechanism. The mechanism is used to enhance robot memory performance based on emotional salience and time parameters. Experiments were performed with a humanoid robot Pepper having verbal and non-verbal interactions with 24 human subjects. Participants rate their perception of the robot in terms of human-likeness, likeability, safety, and emotional expressions through a questionnaire. The results showed that most of the participants enjoyed interacting with the robot and they wished they could have more interactions in the future. They perceived safety and responded favorably toward the robot emotional expressions.

■受賞に当たって一言
We are greatly honored to receive the Best Student Paper Award at the 7th International Conference on Robot Intelligence Technology and Applications (RiTA 2019).
We would like to thank the RiTA 2019 Organizing Committee for presenting us with this award. Also, our special thanks go to Japan Advanced Institute of Science and Technology (JAIST), KDDI Foundation and CARESSES Project for supporting our research.
This award is motivational and inspiring, and it reminds us that we need to do well. 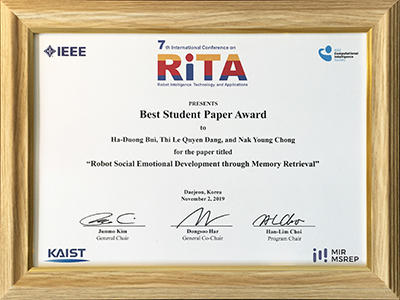